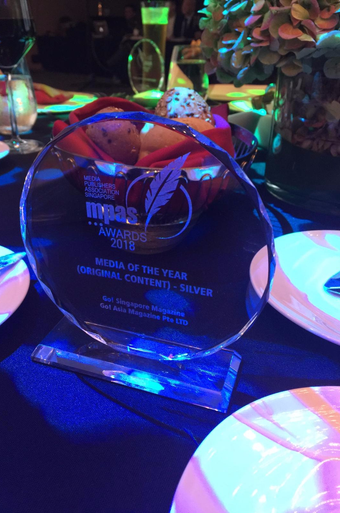 We can proudly announce that the magazine GO! Singapore won the silver award in the Media of the Year Original Content (print) category at MPAS Awards 2018 in Singapore. We are so happy!

GO! Singapore was nominated in two of the most prestigious categories:

–We are extremely happy to be presented with this silver award since we have won it in such tough competition, says President and Editor in Chief  of GO! Singapore Magazine Mr Paer Ola Sjoesten.  Since we launched this concept in SEA 2018 we have only heard positive reactions from both advertisers and readers. And then to be recognised and nominated by MPAS and also be the winners of this silver award makes us so very happy.

We were immensely proud over the nominations, we thought it would be a couple of years to find our platform in Singapore. And then to go on and win this silver is a complete and utter surprise!

All this took place at MPAS Awards on November 8, 2018, at One Farrar Hotel Grand in Singapore.

GO! Magazine is a swedish magazine concept established in 1993. Today the magazine is to be found in SEA (Singapore), the UAE (Dubai/Abu Dhabi) and in Sweden and Denmark under the name Det Händer.

MPAS (Media Publishing Association Singapore) is the leading organisation in SEA for both printed media and digital channels.